The Scot and Kiwi had spent a couple of weeks either working or renovating Hacienda. It was time for a break away camping… 7/12 to 9/12.

A mere 50 minutes they arrived at Low Head. It was located at the mouth of the Tamar River in the picturesque Tamar Valley which meant a selection of beaches.

The Big 4 Lowhead Park had grassy sites, fully equipped kitchen and clean facilities. At $59 for 2 nights on a powered site. (Big 4 Discount).

The Scot and Kiwi were a bit rusty at setting up Slim Jim and the Mighty Corolla had been hastly packed so it was a treasure hunt to locate equipment.

After the duo set up, the Kiwi had spied a happy hour at the local pub. Local meant a 3 km walk to George Town, it was not one of her brightest ideas. The heat of 25 degrees and lack of shade. A $3 pot was welcomed before the Scot and Kiwi walked to the Pier Hotel… authentic Aussie pub and friendly patrons. It was a stroll back to Low Head, they met some friendly local furries. 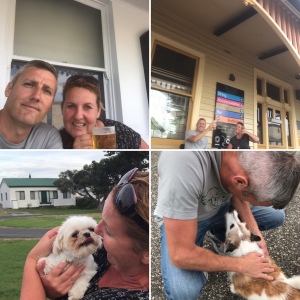 Back at camp, tacos filled the belly before music and a stunning sunset.

Rain had appeared, it provided puddles for the Lady Birds and mini beast to have a shower.

The Scot decided to have Reading club while the Kiwi explored East Beach and Lagoon Beach. 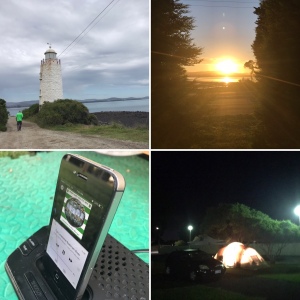 The sun reappeared for a day to relax, listen to music and enjoy the scenery.

Time had flown by on the mini break away… to delay returning to Hacienda, the Scot and Kiwi returned for a long walk to the beaches.

Packing up was easier, the duo ensured no minibeasts would be relocated back.

Acknowledgement to the Author…The Kiwi and The Scot